Origins, patterns, and conservation of diversity in Western Mexico

The Boom Chachalacas are back on the scene, except this time we aren’t as cheery as usual. Why you might ask? Well, because today is the day we leave Mexico, that’s why! We awoke in the wee hours of the morning with our bags packed and our minds (mostly) prepared for the lengthy day of travel ahead of us. You know it’s an early day when you’re awake and active before the chorus of birds begin to ring in the new day for you. After getting everyone’s belongings sorted out and tied down, we all climbed into the van for the last time and set off towards Guadalajara. Did we say that we all climbed in for the last time? We meant almost the last time, as we inevitably had to make (multiple) stops for everyone to grab food and relieve themselves along the way – it was a five-hour bus ride after all. Mountainous scenery gradually transitioned to flat plains, with numerous agave and banana plantations surrounding the highway. Kettles of vultures were seen circling high above with cows dotting the fields below them. As we made the lengthy journey to Guadalajara International, almost everyone on the bus completely passed out. During our waking moments, snacks which had been purchased prior, such as animal crackers and fruit loops were shared amongst the group. We all knew no one was getting on a plane with a giant bag of animal crackers in their carry-on.

The relatively laid-back drive was interrupted only when Steve exclaimed “volcano!” Just like children at a zoo, we all hugged the windows of the van searching the horizon for any sign of it. Finally, we all spotted it off in the distance: Volcán de Colima (also known as Volcán de Fuego or Volcano of Fire). There it stood, menacingly looming over the lands below with a certain peacefulness. It is only in doing some research now that we realize that it is considered one of the most active volcanos in Mexico and North America, which is slightly unsettling.

Once (finally) arriving to the airport, we began the difficult task of saying goodbye to our new Mexican friends. Javier, Hector, Hera, and Yanet were truly incredible people to meet, and we all became close friends within our short two weeks together. We hope to see them again one day!! We made our way into the airport, and out of the Mexican sun for the last time. Most of made it through security without hassle (Jamie) and onto the plane. Our nearly empty flight to Houston allowed us to spread out, which was ideal for Sean and Evelyn who were transporting their BIG hats on their heads (see picture of Leah below for reference). A short while later, we touched down in Houston, and breezed through customs. Leah and Claire (regrettably) ate their bodyweight in American food, and we all boarded the last flight of our journey. A few hours later we touched down in YYZ, collected our bags, and for those of us headed back to Kingston that night, boarded the van. One Tim’s stop later, we made it back to where it all started two long weeks ago – the street behind BioSci.

After almost exactly 24 hours of travel, our incredible experience came to an end. The two-week trip was filled with learning, fun, and friendship. We had a great time and think we can speak for everyone when we say that this trip won’t be forgotten anytime soon. 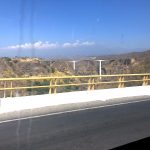 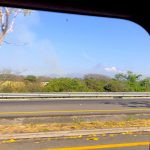 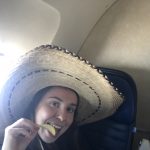 Leah with her diminutive hat

Theme by Anders Noren — Up ↑